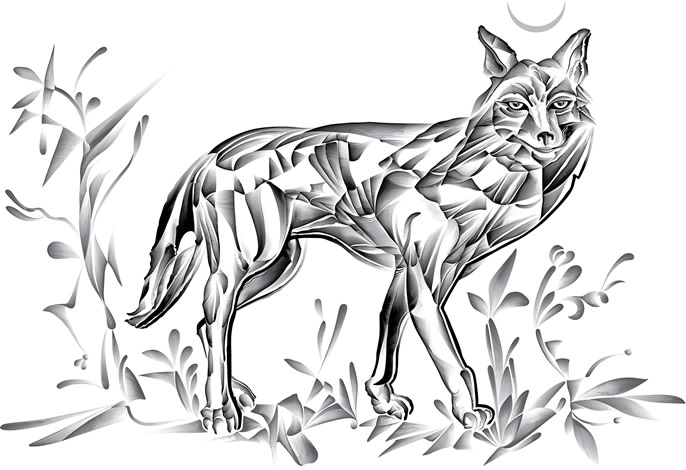 Songs from the Earth
Appendices & Crucible
Learn more about this artwork 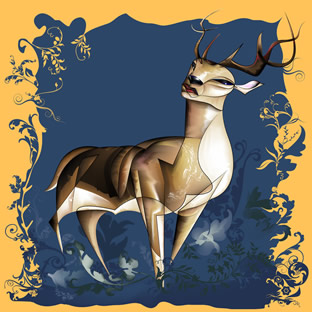 Learn more about this artwork
Front Cover: Between the Trees
Prelude: Wolf and Phoenix (Green Man)
The Green Man is a symbol of rebirth, representing cycles of growth.
Page 2: Wolf and Phoenix
In Norse mythology, the great wolf Sköll devours the Sun. Destruction initiates creation, and phoenix are reborn in the flames.
Page 3: Formless Fire Phoenix
Fiery phoenix circle around a woman’s head as spirits, or maybe they’re thoughts and ideas. Either way, these birds are waiting to take shape in this world.
Page 4: Bird of Prey
Birds are beautiful, living between worlds.
Page 5: Sky Beast Earth Beast
Spirit steps into the physical world, takes a look around, and lives a life. 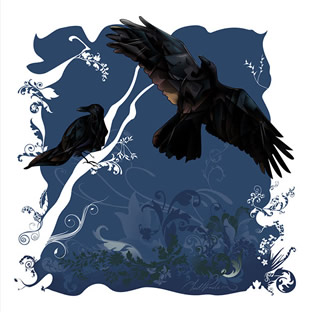 Chapter 1: The Dragon (Western Caduceus)
The caduceus is a winged staff with two snakes wrapped around. It’s an ancient symbol of commerce associated with the Greek god Hermes, messenger for the gods, conductor of the dead, protector of merchants and thieves.
Page 8: The Dragon
Born in the void, Universal Life (personified as a dragon) becomes aware of itself.
Page 9: The Dragon Walks the Earth
The Dragon becomes fascinated by the material world.
Page 10: Dragon and Moon
The Moon represents cycles and time.
Page 11: Floating Dragon
Spirit animates the material world, including the clouds.
Page 12: Fixed Signs
The fixed signs of the zodiac were perhaps first personified by the Assyrian Lamassu. Later, as the Sphinx, Cherubim, and Four Evangelists.
Page 13: Human Dragon
The Dragon becomes human.
Page 14: Dragon Speaks
The Dragon shares ideas.
Page 15: Red Dæmon
The Dæmon are benevolent or benign guiding spirits. The honored dead, similar to ghosts, chthonic heroes, spirit guides, forces of nature, or deities.
Page 16: Forest Dragon
Changing shape again, the Dragon walks the Earth! 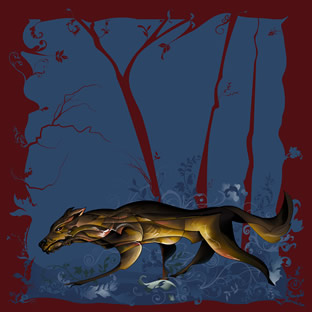 Chapter 2: A World of Potential (Winter Trees)
It has something to do with moonlight shining down on a light snowfall, combined with the way branches weave together, dead leaves, rocks and bushes peaking through the negative space. All merging into a giant tree face looking back.
Page 18: A World of Potential (Mineral)
Everything is alive. Life is the point of the grand old Universe. Life is constantly changing, moving from one state of being into another. Starting with the basic mineral, geometry becomes more organized and complex, turning into something else.
Page 19: The First World (Vegetable)
Look up to the trees. Look into and through their branches. Look to the patterns and geometry those branches make as they reach for the sky. See the patterns tree roots make as they dig into the dirt.
Page 20: The Second World (Animal)
Elk, wolves, mountain, sky and snow.
Page 21: The Third World (Human)
People are distracted, not paying attention to what might be going on in the larger world around them. Their bodies hunched over, focused on the task at hand. They might be building with the blocks or nurturing plants at their feet, which is good, but still only focused on themselves and their work.
Page 22: The Fourth World (Dragon)
Our collective mind, media, and imagination.
Page 23: The Fifth World (Element)
Red is fire. Fire in the mind, the fire in the heart, electrical and nervous systems. The lighter blue body is the air we breathe, the air that circulates through our blood. The darker blue is water and rivers inside each of us. And the main and most obvious running body is the earth... the meat suit. The fifth element is sometimes called wood, sometimes called life, and sometimes called spirit.
Page 24: The Sixth World (Sphinx)
Some riddles will never be answered.
Page 25: The Seventh World (Earth)
Our Mother Earth. Dreaming of the Sun, Moon, and Stars. But mostly She dreams of cloud and sky, mountain lakes, green, and ever-changing life.
Page 26: The Eighth World (Sun)
The Sun is a living being, light animating everything below.
Page 27: The Ninth World (Triad)
Creator, preserver, destroyer.
Page 28: Infinite Worlds
The Universe is alive and moving. Evolving. Slowly lifting itself as if to stand.
Chapter 3: Wisdom (Rattlesnake & Butterflies)
Page 30: Wisdom Descends
Loosely based on the Gnostic story of Sophia (aka Wisdom) descending into the material world, becoming the Earth.
Page 31: Wisdom Rests
Sun as lion, Earth as woman. Humanity has always placed mythic characters into the starry night sky and onto planetary bodies. By associating the sun, planets and stars with a human and animal form, they suddenly become much more relatable.
Page 32: Wisdom Dreams
We all breathe together. We are all part of a larger dream.
Chapter 4: The Four Seasons (The World Egg)
Page 34: Spring (Childhood)
Page 35: Summer (Young Adult)
Page 36: Fall (Mid-life)
Page 37: Winter (Old Age)
Songs from the Earth: Appendices & Crucible (Coyote)
The physical body is a crucible for spirit.
Buck  • Raven • Coyote
Songs from the Earth: Appendices & Crucible (Coyote)
The physical body is a crucible for spirit.
Buck  • Raven • Coyote
Page 42: True Worlds
Back Cover: Nature Looks Back at You
Learn more about this artwork 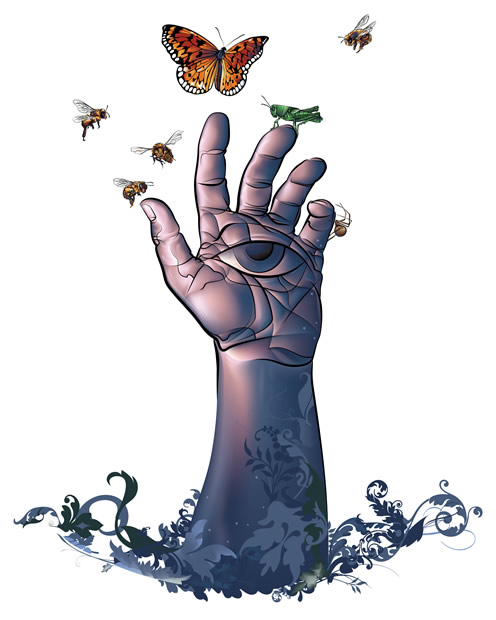 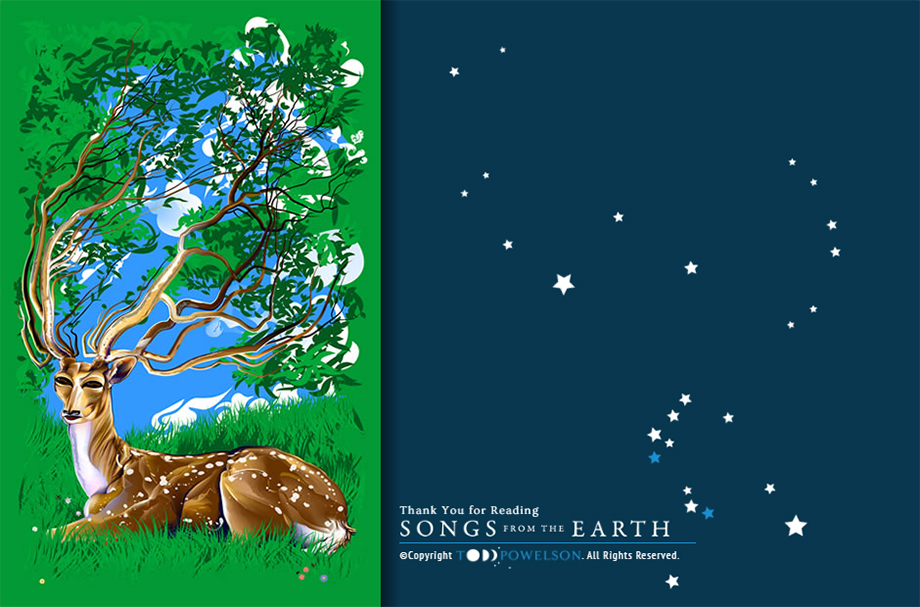 Learn more about this artwork
Turn to Chapter:
Appendices4321Prelude

Thank you! Your submission has been received!
Oops! Something went wrong while submitting the form.

Songs from the Earth: Posts